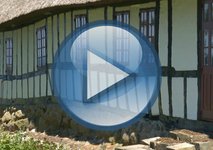 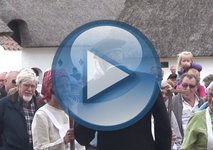 The first time we hear about Hessel is in the year 1391, but the history of Hessel goes further back.

In 1702 large parts of Hessel were destroyed by fire. The oldest building is the big barn, where the heavy oak timbers originate from about 1650. The main building, the farmhouse, is originally a half-timbered house. But this is only shown on the west side facing the park.

The pond in the yard is drinking water for the animals on the farm. There has never been a well at Hessel. Through generations, the drinking water was brought from a spring downhill about 800 metres from the house. A reconstruction of the water cart is placed just outside.

In the famhouse you find the original furniture from the latter half of the 19th century, placed as they were at the last owner - the Elle family. Old carriages and agricultural machinery are placed in the stables and in the big barn, and workshops of blacksmith and a coach builder are to be found.

Hessel has had a turbulent time with a lot of owners through hundreds of years. In 1966, Hessel was bought by the former Aalborg County, but in 2008 it became independent.

Today, Hessel is the last thatched manor with four wings in Denmark.

The museum is situated in very scenic surroundings, with a beautiful view over the inlet. At the museum there is a small café, where you can buy coffee, tea, pies and cake. You may also bring your own food.

Children under the age of 13: Admission free